WORLD MUSEUMS: Art Around The Globe 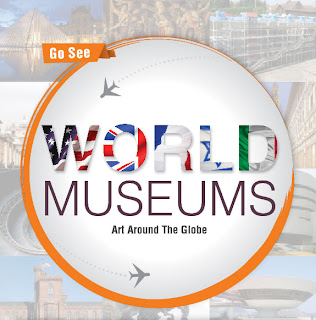 A World of Culture Awaits You


Centuries ago, the Greeks inaugurated the word museum: an institution devoted to the procurement, care, study, and display of objects of lasting interest or value. Today, museums exist in almost every corner of the world. Some concentrate on a particular place in time or culture, while others showcase works of all ages, periods, and styles. Museums pay tribute to the talent, the history, and the enchantment of art.  Museums are a time machine back to the past where works that shaped our entire world were created.  They illustrate times where cultures clashed, yet through museum art, we have been able to embrace humanity and its creative wonders. Museums provide a window to the world’s greatest artists, from modern to classical.  An observer can see through that window and interpret what the artist was feeling and expressing. Connecting us with past masters that have shaped the future, museums allow us to experience those cultures. Thus, as we expand our horizons through travel, take time to experience art through the world’s top museums that have kept cultural histories alive. Begin your adventure...


Metropolitan Museum of Art, New York
The Metropolitan Museum of Art, the MET, is America’s premier center for art collection. It includes more than two million works of art spanning five thousand years of world culture. It has artifacts from every part of the globe from prehistory to the present. Situated in New York City’s Central Park, the MET draws nearly five million people per year. Built in 1874, it houses many categories of art based on its broad range of impressionism. The institution specializes in everything from Classical Antiquity, Ancient Egypt, European Master Architects, to more modern instruments of art.  These include musical devices, costumes, weapons, armor, an Islamic art section with Mosques, textiles, ceramics and a rooftop garden. Globally, this pipeline of culture is ranked third in the world.  Its reputation of prestige and extensive specialized knowledge is highlighted through its special staff of curators in each department.


The Guggenheim, New York
Globally renowned for its ground-breaking architecture, the Guggenheim is a timeless landmark, creating the perfect environment for contemporary and modern art exhibitions. The Guggenheim’s permanent collection has a distinctive individuality that separates it from other modern museums around the globe. The collection features works by some of the most popular artists of the 20th century such as Eduardo Chilida, Yves Klein, Robert Motherwell, and Andy Warhol. Always staying true to its mission to collect, conserve and study, the Guggenheim illustrates art of the new millennium from an assortment of perspectives, reaching a broad and diverse audience.


The Modern Museum of Art (MoMA), New York
The Museum of Modern Art serves as a gateway from the classical and never forgotten past to the modern and innovative art of now. The MoMA’s primary concept is to facilitate the shift from precedent artworks and attempting to understand and therefore take pleasure in the art of our time. Hosting astonishing exhibitions such as “Picasso: Guitars 1912-1914” and “Shaping Modernity: Design 1880-1980” the MoMA successfully magnetizes a vast audience that expands from scholars to young children. All in all, the Museum of Modern Art is a conversation between the past and the present, a continuously moving illustration of the evolution of art.


The Smithsonian, Washington D.C.
The Smithsonian is known as the world’s largest museum and research complex.  It consists of nineteen museums and galleries, the National Zoological Park and nine research facilities. Through incredibly diverse and distinguishing artworks, the Smithsonian upholds its four grand challenges: unlocking the mysteries of the universe; understanding and sustaining a biodiverse planet; valuing world cultures; understanding the American experience. The Smithsonian is home to over 137 million astonishing and culturally essential artifacts.  Visitors experience western air and space memorabilia, such as Amelia Earhart’s Lockheed Model 5B Vega plane, to eastern sculptures, such as the Bodhisvatta, that has been conserved for centuries.  The Smithsonian sustains art as distinct and variable as the visitors themselves.


Centre Georges Pompidou, Paris
The Centre Georges Pompidou is the largest museum for modern art in Europe.  It is situated in the Beaubourg area of Paris and is architecturally as unique as the artwork within.  Its revolutionary design is attributable to visible color-coordinated functional and structural elements of the building. The Centre Georges Pompidou is entirely focused on modern and contemporary art.  It is a place where visual arts meet and integrate with theatre, music, cinema, literature and the spoken word.  The Centre Pompidou holds a vast library, cinema, performance hall, music research institute, bookshops, restaurant and a café. Completely committed to its mission of spreading knowledge about creative works from the 20th century, the museum hosts over thirty public exhibitions hosting millions of visitors each year.


The Tate Museum, London
The Tate is an institution that maintains the United Kingdom’s national collection of British Art, as well as International Modern and Contemporary Art. Its network of four art museums: Tate Britain, Tate Liverpool, Tate St. Ives and Tate Modern, exemplify the separation of church and state by its disjointing what is British versus what is modern art. This is one of the reasons why it specializes more in Victorian era art than any other art facility. While this regional art centre is public funded, its collections stem from private collectors and donations that started from the early 1500’s. One of the Tate’s most publicized art events is the awarding of the annual Turner Prize, which takes place at Tate Britain. The Turner Prize is presented annually to a British visual artist under the age of 50. Awarding the prize is organized by the Tate gallery and staged at Tate Britain. Since its beginnings in 1984 it has become the United Kingdom’s most publicized art award.


The Vatican, Rome
A timeline of art through the ages, the Vatican Museums are among the world’s greatest museums displaying masterpieces collected by the Roman Catholic Church throughout the centuries. Located en La Citta Eterna (The Eternal City) Rome, the Vatican Museums are inside Vatican City.  They maintain the magic and luster of the Renaissance, carrying the worlds most renowned classical sculptures and timeless masterpieces.  Over four million visitors walk through the splendid museums each year. The Vatican Museums have been enlightening people of all cultures for over five hundred years, making it one of the oldest, most breathtaking pieces of history and fascination. Among the masterpieces presented are Raphael’s The School of Athens, worshipped by art aficionados as a timeless eternal work, Leonardo Da Vinci’s St. Jerome in the Wilderness,and Caravaggio’s Entombment. The Vatican Museums are the birthplace of the Sistine Chapel, the best-known chapel in the Apostolic Palace, the official residence of the pope. One look above and the viewer will be taken by the chapel ceiling painted by Michelangelo and his celebrated painting The Creation of Adam. Famous for its astonishing frescoes created during the Renaissance by artists including Michelangelo, Sandro Botticelli, Pietro Perugina and others, the Sistine Chapel and Vatican Museums are an enlightening memory of what was once the Golden age of the Arts.


Galleria Degli Uffizi, Florence
Dating back to the 14th century, this museum is easily one of the eldest and most recognized of the entire western world. Located in the heart of Florence, the Uffizi impeccably flaunts Italy’s superbly rich culture and history through the works of Leonardo Da Vinci, Sandro Botticelli, Michelangelo, and Raphael. The Uffizi is a time capsule to the height of Italian art, being home to one of the most famous works of art, The Birth of Venus. Just as captivating as the artwork, is the architectural masterpiece of the Uffizi itself. Built by the master of Vasari in the shape of a horseshoe, the Ufizzi is predominantly a large hall with a Doric screen at its end.  This opens a view to the Arno River, creating space which seemingly continues past the corridor’s walls. As art abounds from the frescoed ceilings to the intricate columns of the courtyard, each wall holds the world’s most valuable pieces of Florentine art. The Uffizzi not only contains art, but is a masterpiece all on its own.


The Louvre, Paris
Upheld as the “museum among museums,” the Louvre is the majestic capital of the world’s finest artworks. Since its founding in the 18th century, it has remained recognized as a world-renowned center for the celebration and history of art. Containing more than 380,000 objects and displaying 35,000 works of art in eight departments, it stretches over 60,000 square feet of pure artful magic. The Louvre’s noteworthy collection crosses thousands of years and continents, reaching from India to China, Americas to Europe. Acknowledged for works as the Mona Lisa, the Venus de Milo and the Victory of Samothrace, the Louvre takes place as the most visited museum in the world. Described as a museum of all, the Louvre takes pride in a constant willpower to reach the most extensive French and international audience possible. Through an incredible amount of artistic works and masterpieces, the Louvre captures the journey of art and the heart of  cultures that created and defended it.


British Museum, London
The British Museum is one of the most complete timelines of all of human history and culture. Everything about the British museum, from its architectural design to its monuments, is dedicated to telling the story of ancient history through the living cultures of the modern day.  The museum’s collection contains more than seven million paintings and sculptures.  It is the second most globally visited museum by tourist and locals alike. The museum itself is divided into three primary houses but categorizes collections based on continents, artistic themes and types of art (antiquities, archives and libraries). Its classical Greek Neo-Classical department earned its superb reputation by categorizing seventy million trinkets, while maintaining 150 million books and manuscripts of ideas and design to the Natural Museum.  This museum alone also has fourteen million items of Egyptian history outside of Cairo, including Rosetta Stone, erected mummies and coffins from Africa’s cult of the dead.


The Israel Museum, Jerusalem
Located in Jerusalem, the heard of Jewish culture, the Israel Museum was founded in 1965.  It houses encyclopedic collections consisting of works dating from prehistoric times to the present day. It is known for featuring the most comprehensive and extensive collection of biblical archaeology. The Israel Museum is ranked among the top museums of the world. One of the many highlights is the Shrine of the Book, which encloses the Dead Sea Scrolls.  The Scrolls are the oldest biblical manuscripts to date. The Israel Museum’s vast collections of religious works encompass extremely rare medieval biblical manuscripts. The Museum expands from illustrative arts to a leading archeology museum featuring the Model of Jerusalem in the Second Temple Period.  This Model recreates the topography and architectural elements of the city prior to its demolition by the Romans in 66 CE. The Museum’s collection of artwork includes works of sculptures by modern masters Jacques Lipchitz, Henry Moore, Claes Oldenburg, Pablo Picasso, in the distinguished Billy Rose Art Garden. One is sure to delight in both art and a rich culture at the Israel Museum, Jerusalem.
Posted by AroundTown® Magazine at 1:30 PM